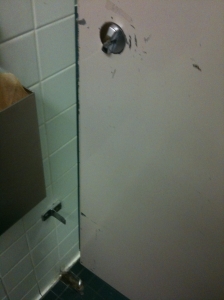 One of the stalls in the basement woman's restroom at NYU's 25 W. 4th St. still couldn't be closed two weeks after I sent in a work request and after I was told they completed a work request (but I'm not sure which one).

So a few weeks ago I began working on my final assignment for Journalistic Inquiry at New York University. I decided to focus on an area rarely breached by anyone because it is so awkward to talk about–the bathroom situation. Because the final assignment isn’t due until Sunday, I won’t spoil what I’m focusing on yet. But for the so-called “sniff” assignment due a week ago, I investigated the state of the basement bathroom at NYU’s 25 W. 4th St.

Before conducting some field research on April 26th, I sent in a Facilities & Construction Management work request form about the bathroom, because I had spoken to a few women who were unsatisfied with it: Many of the people I interviewed explained they believed the bathroom was in extremely poor condition. To be clear: I understand that keeping bathrooms clean is hard, especially for university bathrooms that get a lot of traffic, which is why the piece’s focus was the bathroom’s condition in terms of physical condition.

After I published the blog post, nothing happened. Then last Sunday, F &CM sent me the following email, acknowledging that they had completed my work request. (The work request number doesn’t match the number of the original request I sent, but while I was interviewing Beth Morningstar for the article, she said she was sending in a work request form for me, so I can only assume that the one she sent matches the completed form below.)

We are pleased to inform you that your work request number 11-084145 has been completed.

Work Description:         25-W 4TH ST,BSMT,WOMANS BATHROOM STALLS ARE WOBBLY
AND NOT SUFFICIENTLY ATTACHED TO THE FLOOR

If you have any questions regarding the work that was performed,
please reference the work request number 11-084145 when contacting us:

One of the eight stalls in the basement woman's restroom at NYU's 25 W. 4th St. was locked from the inside. I took this picture by holding my phone above the door.

Yesterday, May 3, I visited the bathroom again from 10:30-11 a.m. Though I didn’t have a whole lot of time to investigate the bathroom’s conditions, two of eight stalls were unusable–both for the same reasons highlighted in the last piece. One of the stalls was, again, locked from the inside. Another stall’s door still couldn’t be locked let alone closed.

I understand that a university failing to fix two stalls in  a single bathroom isn’t the end of the world. I also understand that it takes a while for a work request to go through a large institution’s bureaucratic nonsense. But I don’t understand how F&CM can send someone to check the bathroom and then–even if that person were only checking the stalls’ wobbly-ness–how that person can see that two of the eight stalls are unusable and not fix it. And then to have the nerve to send me a note explaining it’s okay, the stalls aren’t wobbly–that’s unacceptable.

As a person who pays a ton of tuition to this university, I would really appreciate it if the university would be honest about the state of its facilities. I also suspect that the bathroom could be fixed with only a fraction of my personal tuition for one semester. I don’t know how to say this any clearer, but “this reporter” is disappointed with NYU.